Minturn is probably described most often as the house with the big columns. Those 4 huge columns are just a characteristic that can’t be missed!

After all the windows and trim had been refurbed and painted it was finally time to start on the columns! I knew once they were painted it would finally start to look like we were making progress to our passers by. It’s hard to watch a renovation from the outside when for so long it looks the same because all the work being done is hidden on the back roof.

The hard part was trying to figure out how to remove all that old paint. Somewhere in her history someone tried to repaint the columns but didn’t do that great of a job. There were a lot of run spots and glops of paint that I don’t even know how they happened. 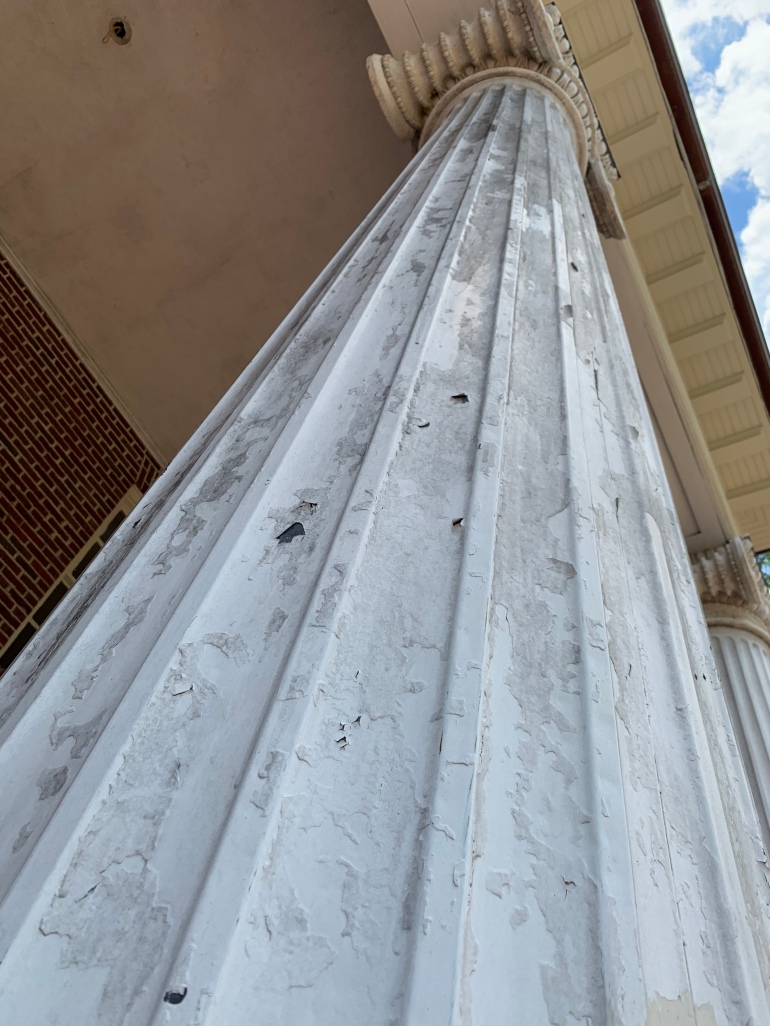 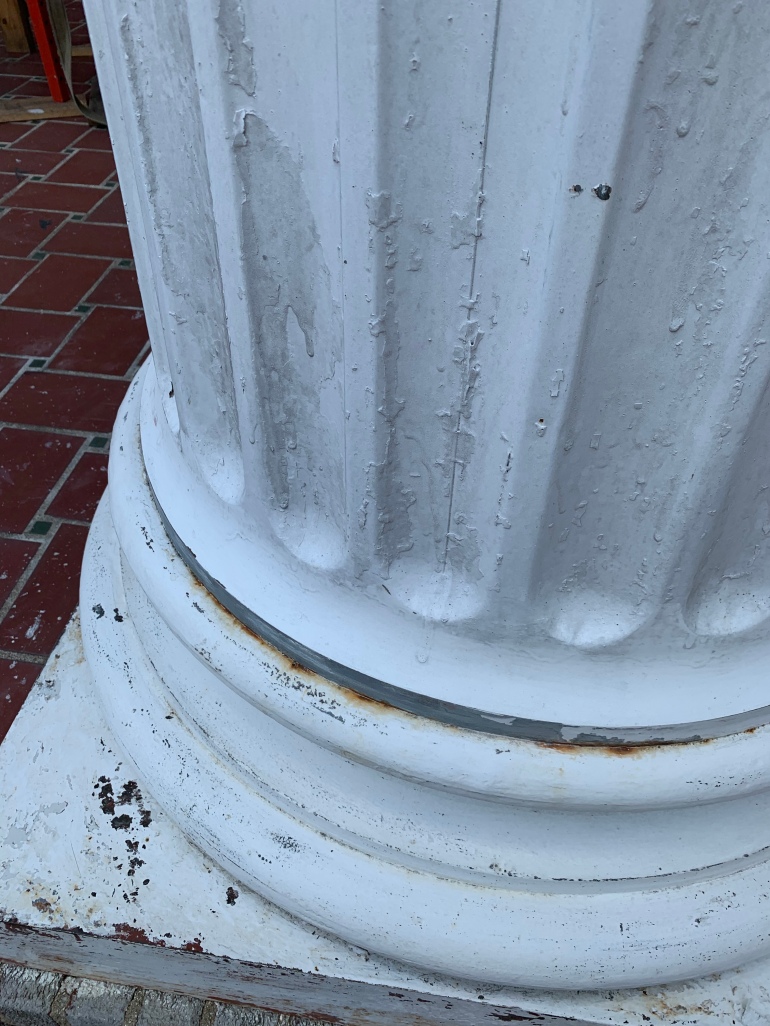 The details on the capitals are so ornate that sanding them was going to take some serious time. We had experimented with using chemicals but didn’t like the process or the cleanup. Sanding would take forever and use so much paper and Scrapping with a heat gun would take weeks. Sammy kept researching and eventually found this amazing pressure washer that had a hot water heater built in! The Easy Klean was the perfect machine to help us restore the columns! Here is the link in case any of you find a need for this Amazing piece of Equipment!

As soon as we started spraying the columns with the hot water the paint immediately came off. It was so easy! All 4 columns had all the paint removed in less than a week with only 1 guy working on them! 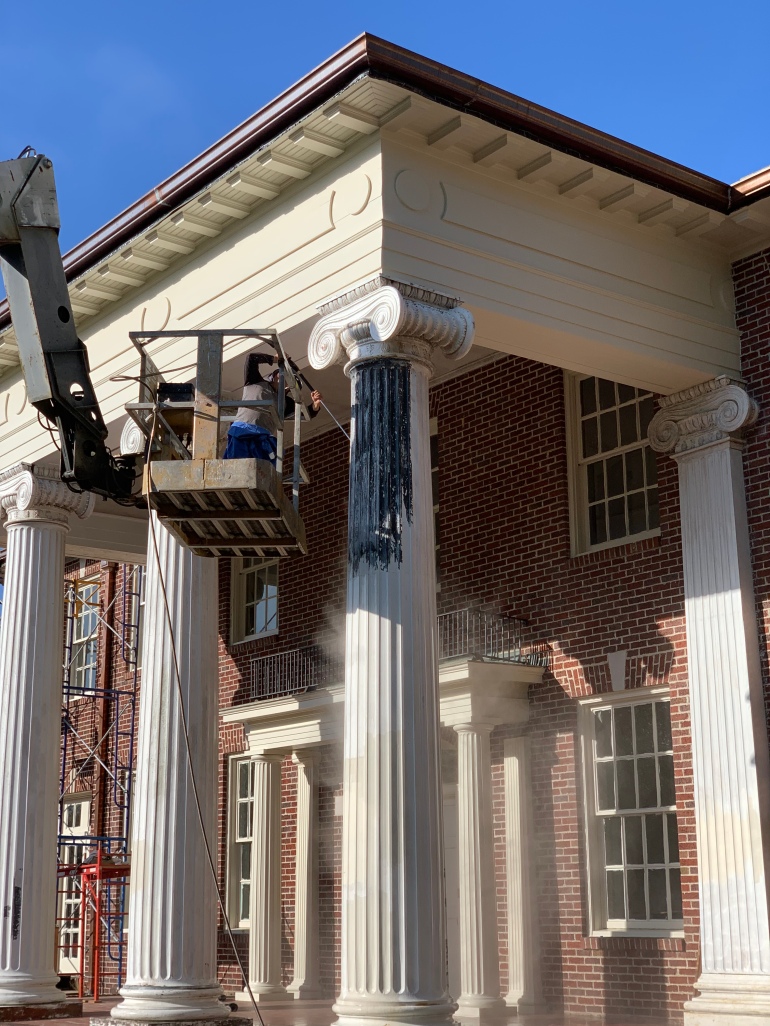 The main part of the column is made of metal however the capitals on top are plaster, making their paint removal a little more complex. The capitals also had damage from erosion over time and holes from the bees that decided to make their hive inside. 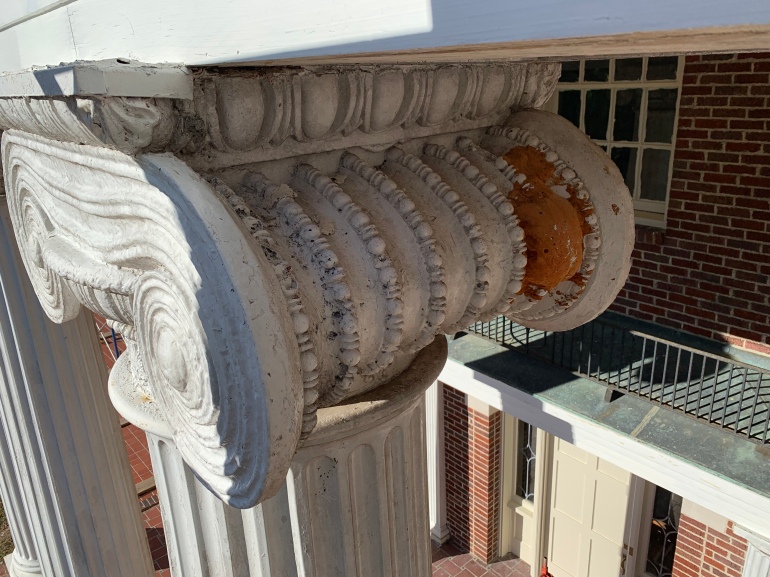 One of our guys rebuilt these details using epoxy and did such an amazing job! It was a long process that took a lot of patience! 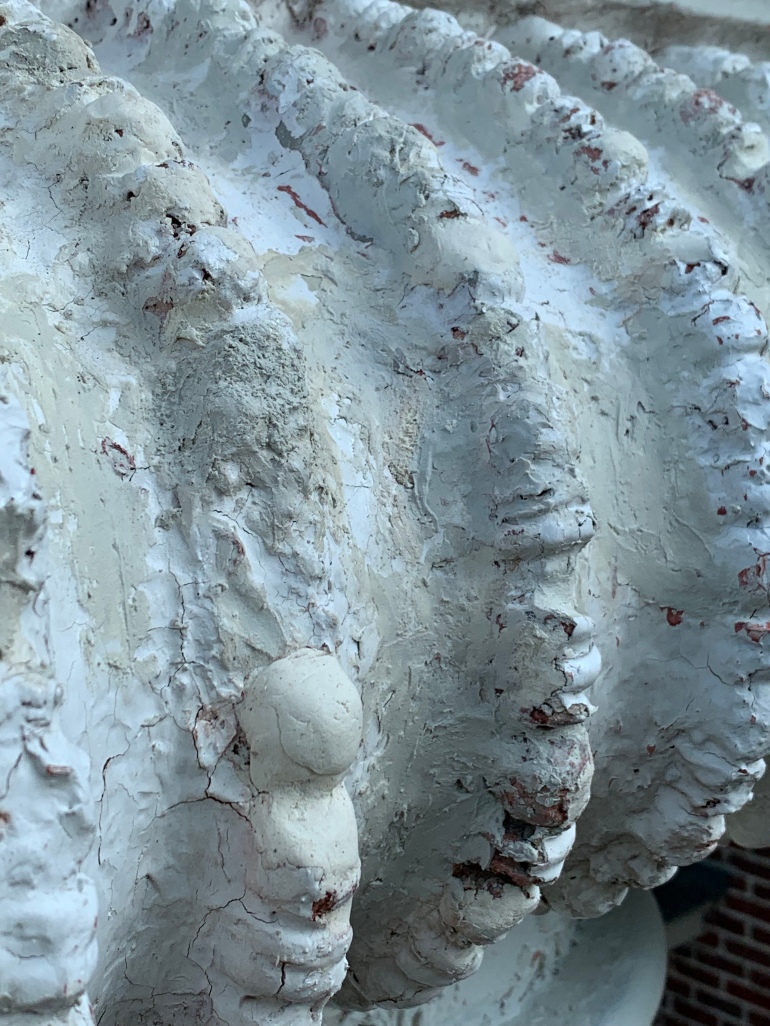 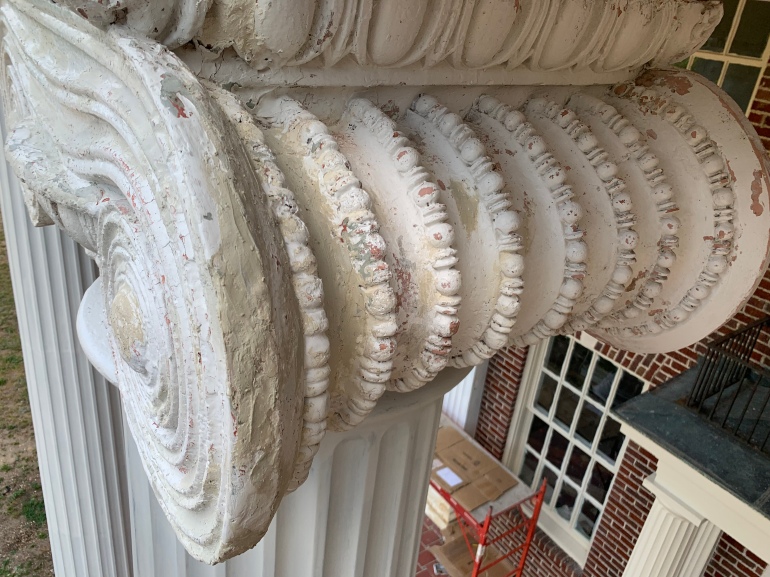 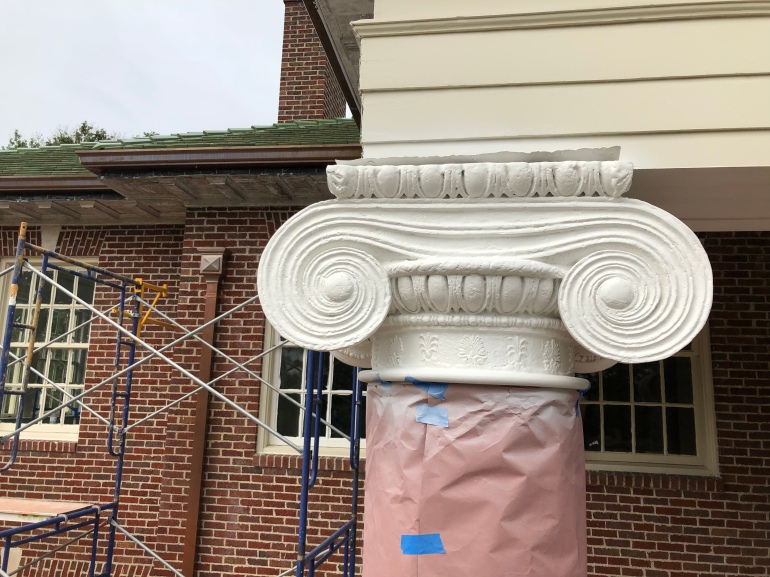 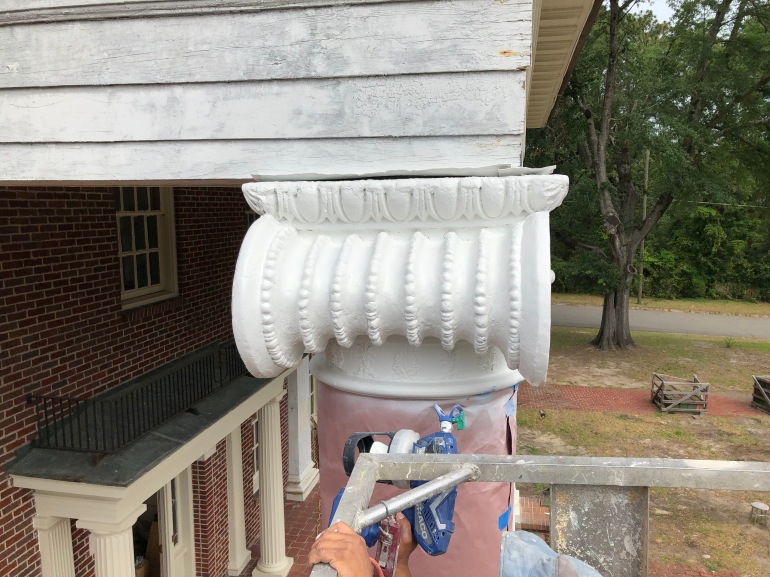 Also, any rust holes were repaired with Bondo.

After the columns were down to the metal, and the epoxy and bondo was dry and sanded it was time for paint!

When we started picking out paint colors I was sure that I did not want white even though white is the common color of choice for classic architecture. I felt that Minturn already stood out so much that maybe she would look better if we toned down her trim a little bit. After many paint samples we decided on Sherwin Williams color Grecian Ivory! It wasn’t too dark or too yellow and it matched the brick mortar perfectly. Do you think we made the right decision? 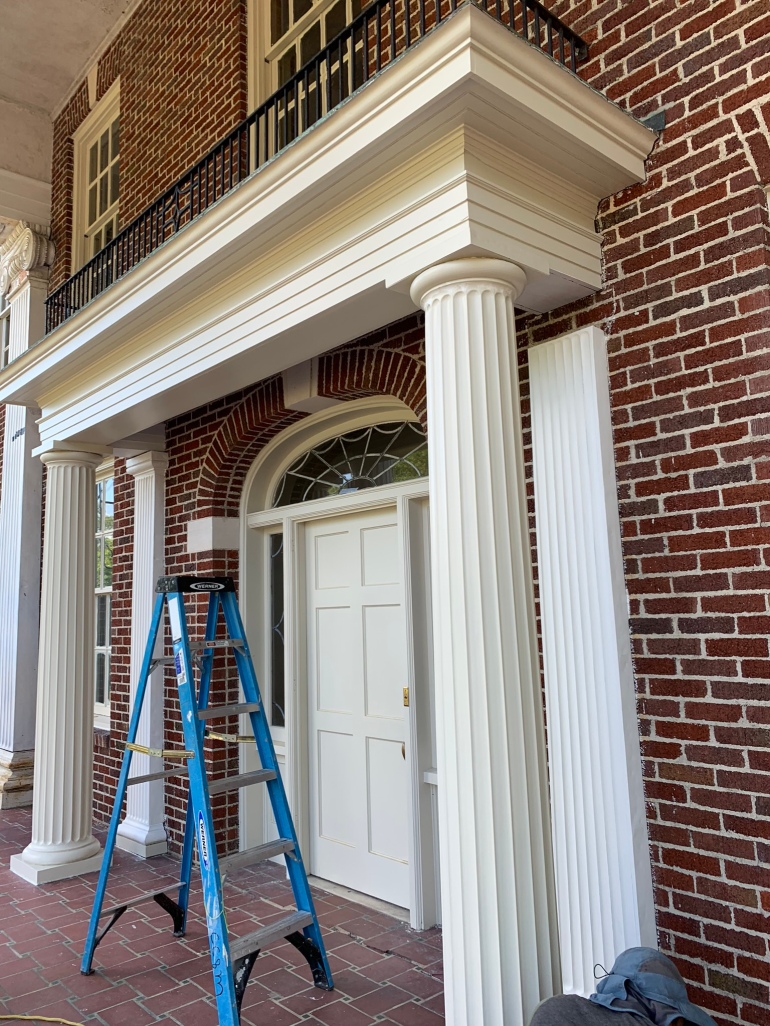 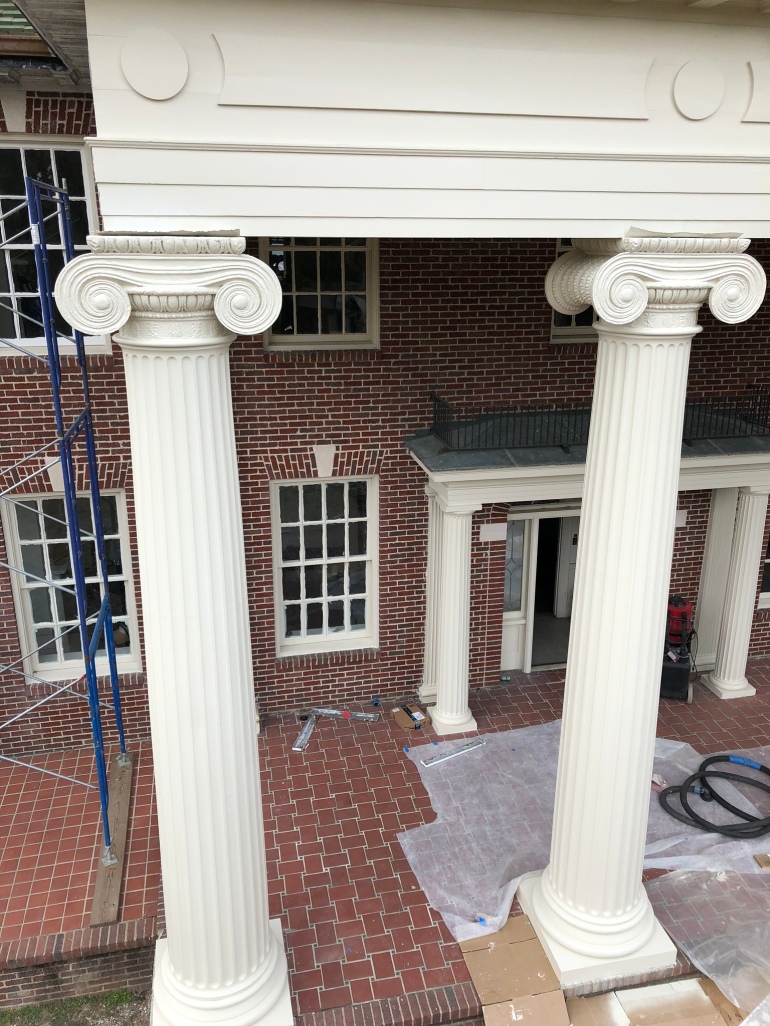 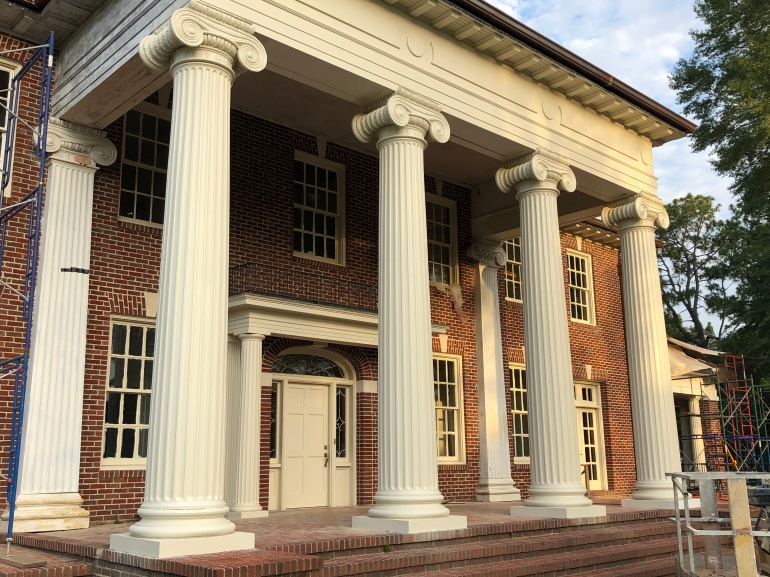 View all posts by minturnhouse

Hi, I’m Ashley! My husband, Sammy, and I are renovating a 1920’s Classic Revival into a forever home for our family in North Carolina. I’m a mom of three little girls and two poodles. I’m an adopter of dogs and old homes! Join me on this adventure!